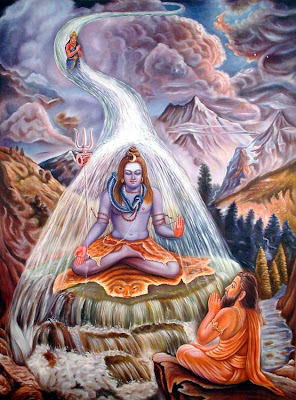 The earliest reference to yoni tattva in Kaula tantra is in the Kaula Jnana Nirnaya of Matsyendranath(English translation published by Prachya Prakashan, Benares, 1986):– One should always consume the physical blood and semen. (KJN, Patala 8)


Other Kaula tantras deal with the subject of menstrual blood in very plain terms. Matrikabheda Tantra (Englishtranslation Indological Book House 1990) describes the different types:– “Shri Shankara said: The firstmenses appearing in a woman who has lost her virginity is Svayambhu blood. In a maiden born of a marriedwoman and begotten by another man, that which arises is Kunda menses, the substance causing the grantingof any desire. Deveshi, a maiden begotten by a widow gives rise to Gola menses, which subdues gods. Themenses arising in the first period after a virgin becomes a married woman is the all bewildering Svapushpa.”(MT, Patala 8)


The first chapter of the MT mentions a substance called sambal, described in the commentary as menstrual discharge. This substance allows the tantrik adept to perform various sorts of alchemicaloperations.

The Kaulavali Nirnaya (Agamanusandhana Samiti, Calcutta nd), edited by Sir John Woodroffe, is a digest ofother Kaula tantras. Summarising chapter 18, Sir John paraphrases the tantra:– “there are people who regardsemen and menstrual fluid with disgust, but they forget that the body by which they hope to attain Liberation iscomposed of these two forms of matter, that the marrow, bone and tendons have come from the father and theskin, flesh and blood from the mother. It further says that there is no reason for man’s disgust for excreta orurine, for these are nothing but food or drink which has undergone some change and contains living creatures and the Brahman substance is not absent therefrom…All things are pure. It is one’s mentality which is evil.”(KN, introduction, pp19-20)


Reverence for Women
The Kaulas regarded female gurus highly and there were many examples of yoginis or female tantriks. InYoni Tantra Patala 7 we find:–

“Women are divinity, women are life, women are truly jewels.” This sentiment is echoed in many other tantrassuch as Shakti Sangama Tantra, Devirahasya and elsewhere. A woman is the goddess:– “Worship carefully awoman or a maiden as she is Shakti, sheltered by the Kulas. One should never speak harshly to maidens orwomen.” (KJN, Patala 23)

“In Kaula every woman is thought of as a manifestation of the Goddess. No man may raise his hand, strike orthreaten a woman. When she is naked, men must kneel and worship her as the Goddess. She has equal rights with men on all levels.” (Occult World of a Tantrik Guru, Values Vol.IX)
“Women are heaven; women are dharma; and women are the highest penance. Women are Buddha; women are the Sangha; and women are the perfection of Wisdom.” (CT 8,30)
KamarupaThe Yoni Tantra hails from Cooch Bihar (Kocha), but many of the Kaula Tantras originate from Kamarupa. InPuranic legend, this is the place where the yoni of Devi fell to earth after the Goddess’ body was sliced into 50segments by the discus of Vishnu.


First Patala…
O Lady Goddess!  Worshipping in this manner, liberation is placed within a person’s reach.
A yoni worshipper should prepare the Shakti mantra. He gains wealth, poesy, wisdom and omniscience. If a person worships with menstrual flowers, he also has power over fate. Doing much puja inthis way, he may become liberated. The devotee should place a Shakti in a circle. She should be wanton,beautiful, devoid of shame and disgust, charming by nature, supremely alluring and beautiful. The devotee should worship her with utmost devotion. He should place her on his left, and shouldworship her hair-adorned yoni. At the edges of the yoni, the devotee should place sandal and beautifulblossoms. After smearing sandal on her forehead, the devotee should caress herbreasts.
After reciting the mantra for 108 times, while in her arms, the devotee should caress the breasts, havingpreviously kissed her on the cheek. The mantra should be recited 108 or 1008 times in the yoni circle.
After performing yoni puja using these methods, the devotee attains whatever is desired — there is no doubt ofit. The fruit of doing puja to the great yoni, deliverer from the ocean of misery, is life and enhanced vitality.


Second Patala
Which types of yoni should be worshipped and which bring good fortune?
The devotee should worship the mother’s yoni and have intercourse with all yonis. He may have intercourse with any woman between ages 12 and 60.
He should worship the yoni daily, using the 5 tattvas. The forehead mark should be made from yoni tattva.
First, in intercourse, the purified worshipper should draw the Shakti to himself by her hair and should placehis lingam into her hand. The lingam puja and the yoni puja should be performed according to the injunctions.  Beloved One, red powder and sandal should be smeared on the lingam.
The lingam should be inserted into the yoni and there should be vigorous intercourse. He who uses thismethod attains the highest essence. A devotee should worship with the yoni tattva, of the form of yoni, thedeluder of the world, at night when it is full moon, at a crossroads.
Having seen the yoni full of menses, after bathing and reciting the mantra 108 times, a person becomes a Sivaon earth. One should recite the mantra after offering both one’s own semen and the yoni flowers.

By all means a sadhaka should haveintercourse in the yoni, previously caressing the Shakti’s breasts.One becomes instantlyregenerated and fully alive by using the water from washing yoni and lingam. After worshipping the great yoniaccording to injunction, one should make an offering. The water of the yoni is of three types and one shouldoffer it to the Shakti.


Third Patala
The miraculous Yoni Tattva Tantra is the best of all tantras.The only evil in sexual intercourse is disgust for blood and semen.
The yoni which hasbled is suitable for worship. Do not worship a yoni which has never bled.
Combining semen with menses and taking this in the hand, carefully offer itinto the Yoni.By worshipping the yoni one certainlyworships Shakti.


Fourth Patala
What knowledge in the three worlds can match the magnificence of the yoni tattva?
In this temperament there is exclusive devotion to the doctrine of the yoni. Onebecomes pure by making a forehead mark of yoni tattva.


Fifth Patala
One should always meditate on the pure yoni. One should always smear the yoni tattva on thebody. If one should place one’s lingam next to her vagina and then penetrate, one becomes liberated.
In the mutual friction of the lingam and yoni is great sadhana. The greatest thing in mantra recitation andsadhana is the outflow of semen and vaginal emission.
The powerful sadhaka, following the rule, should offer the augmented substance to the yoni region after mixing the semen and yoni tattva together.
The wise man should caress that yoni. After worshipping according to rule, one should not have intercourse. One should only couple with the yoni that bleeds.
If one should worship a hair-adorned yoni, one becomes like a king. All acts become fruitful, no doubt of it. Onebecomes very wealthy if marking oneself with a forehead mark of yoni flowers.
A sadhaka wishing to worship a yoni,which is the form of the cosmos, should cause an erection and insert it into that thing which is Shakti Herself.Worshipping them, one becomes liberated while still alive, there is no doubt of it.


Sixth Patala
If a person should gaze at a yoni while ritually bathing, his life becomes fruitful. There is no doubt of this.
If a worshipper of the yoni tattva enters a dispute,after conquering all enemies he becomes ultimately victorious. What is the point of bathing in theGanges? What need is there to resort to sacred places? There is nothing equalling devotion to the yoni. Actingotherwise is useless. There is nothing praised in the world more worthy of praise than the yoni tattva.
One should bring together the yoni and the lingam and worship the tattva. One should place oneself inthis certain thing and give everything to Shakti. One should satisfy using the five tattvas in the shape of thevagina, which is the whole universe.
Liberation is achieved through enjoyment. Happiness is gained through enjoyment.Therefore, by every effort, a sadhaka should become an enjoyer. The wise man should always avoid blame, disgust or shame of the yoni.
If one should lick the elixir at the edge of the yoni, evil in one’s body or dwelling place is certainly destroyed.
The leftovers of both the Shakti and the Vira should be drunk.
If one should worship the yoni, bowing thrice with a flower, all karmas are destroyed and nothing in the threeworlds becomes unattainable.


Seventh Patala
After eating and drinking, one should then consume yoni tattva. Of all food, this is the food which should be worshipped fearlessly. Sexual intercourse in every kind of yoni is widely praised. Oneshould always smear a line of menstrual blood or sandal paste or semen on the forehead. This isthe core of true bliss.
There is no such thingas an inauspicious time. It makes no difference whether it be night or day, the 14th day of the waning moon orthe twilight time.
Women are divine, women are life, women are truly jewels. Always have intercourse with a woman andmeditate, whether she be one’s own woman or not. That which has been revealed to you is the whole essencehidden in all tantra.

At the time of consuming the substance, one should firstly offer it to one’s Shakti. Otherwise, one may first castwater into the vagina. The sadhaka should have sexual intercourse with his Shakti after enjoying food and reciting the mantra.
Now listen to the time when the semen-menses is emitted. If one should worship the yoni tattva,making a forehead mark with it, all defects and evils of a hundred births are immediately destroyed.
By yoni tattva oblation, the ancestors reside in paradise. One should always caress a nubile yoni. Ifone should divert oneself in the urgent dance after preparing the cavity of the great yoni, then one is freed fromall defects and stains of all births.


Eighth Patala
Without sexual union, there is never liberation.Worship a nubile yoni in a highly ecstatic way.
Whosoever recites mantra in a supremely devoted way specifically to the yoni, the core of the universe, is within reach of liberation.

Meditate with yoni on the tongue, yoni in the mind, yoni in theears and yoni in the eyes. Mighty Lady, all sadhana is vain unless with the yoni. Therefore, reject other pujasand do Yoni Puja.