Tantric orgasm is a full body energy experience. G-spot stimulation is one way to access Tantric orgasms. The G-spot (Grafenberg spot) is a small, lima bean-shaped area on the upper side of the vaginal wall (tummy side), approximately 2-3 inches in. This spot feels different in texture than the rest of the vagina. It is spongy and coarser in texture than the rest of the vagina, which is normally how it is found. When the G-spot is stimulated, via hard pushing or constant rubbing, it causes intense O-feelings that women say exceeds a normal orgasmic response.
To stimulate the G-spot, pressure has to be applied on the upper wall of the vagina, AND the woman has to be extremely aroused. Blood rushes to the G-spot just as it does to the clitoris during sexual excitement. Therefore, any sexual position  maximizing pressure to this area increases the chance for a G-spot orgasm. The following 4 positions increase a woman’s chance to experience G-spot orgasm. 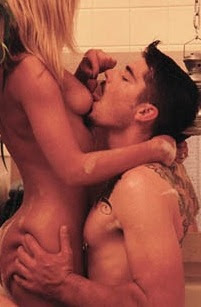 1.   Rear Entry.  The Rear Entry position, when done correctly, maximizes potential for a G-spot orgasm because the man’s penis should rub on the upper wall of the woman’s vagina. To do this position correctly, the woman should kneel on all fours, her legs parted slightly. The woman should resist the urge to put her face down onto the bed, and instead try to keep her back arched slightly, with her elbows bent or her elbows up and locked. The entry angle changes dramatically when the woman leans forward into the bed. As the man enters her from behind, the sensation should be one of tight and full penetration. The woman may feel his penis hitting her cervix as this is often best to get full penetration. He can change his penetration to hit the G-spot by pulling up on her hips and thrusting in a more downward motion.
2.   The Fusion.  The Fusion position is a favorite in Kama Sutra. To get into this position, the man should sit on the bed or floor and extend his legs in front of him, and his arms behind him. The woman should then lower herself down onto his penis. Her legs should be up by his chest and bent, and her arms should be behind her and between his legs. She then uses a combination of her arms and her legs to â€œrockâ€ herself on his penis in and in and out motion, sort of like a piston. This position may seem unlikely to produce a G-spot orgasm, but the angle and the seductive nature of the position make it highly erotic. The only drawback of the fusion is if you have bad knees, you cannot sustain it for long.
3.    The Flower Press. The Flower Press position is excellent for the G-spot orgasm, multiple orgasms, heavier male partners, heavier female partners, and pregnant women (earlier months). The woman lies on her back and allows the man to penetrate her, as in missionary position, but after penetration has been achieved, she then raises her legs up and back, until they are either on his shoulders or on his chest. The man kneels up against her and uses her thighs for support, and she can grab onto his hips to help bring him into her. This position allows for extreme penetration and his pelvic arch is against her clitoral area. It also provides a nice rubbing against the top of the vaginal wall because of the height of the man compared to the woman, which is what stimulates the G-spot.
4.    Rotated Woman. The Rotated Woman position is adored by both men and women for its excellent stimulation. To do it, he lies flat on the bed and she lowers herself onto his penis facing BACKWARD toward his feet. Then, SLOWLY and CAREFULLY, she leans forward, until lying on top of him, her legs outstretched and her hands down by his feet. Then, she can slowly do a â€œfigure 8â€ motion with her hips or just grab his ankles and slide herself up and down. Because she is lying down at this angle, her vagina is taut, causing the penis to rub it tightly, hence the G-spot pressure. She also gets clitoral rubbing by his testicles and legs…a lovely surprise. In total control, she sets the pace and depth of motion.

Tantric sex  enhances  physical sensations and transforms them into a vehicle for blissful insight. Women feel the orgasm from the G-spot or vaginal stimulation deeper inside their body, rather than localized feeling with clitoral stimulation. Whole-body orgasm is one of the Tantric methods for reaching a state of ecstasy.
When personal Tantra instruction is too expensive, Al Link and Pala Copeland’s Sexual Mastery Course and Kerry and Diane Riley’s Ultimate Home Tantra Course are two excellent self-teaching courses. I highly recommend either of these courses for those who want to explore Tantra in the privacy of their own home.